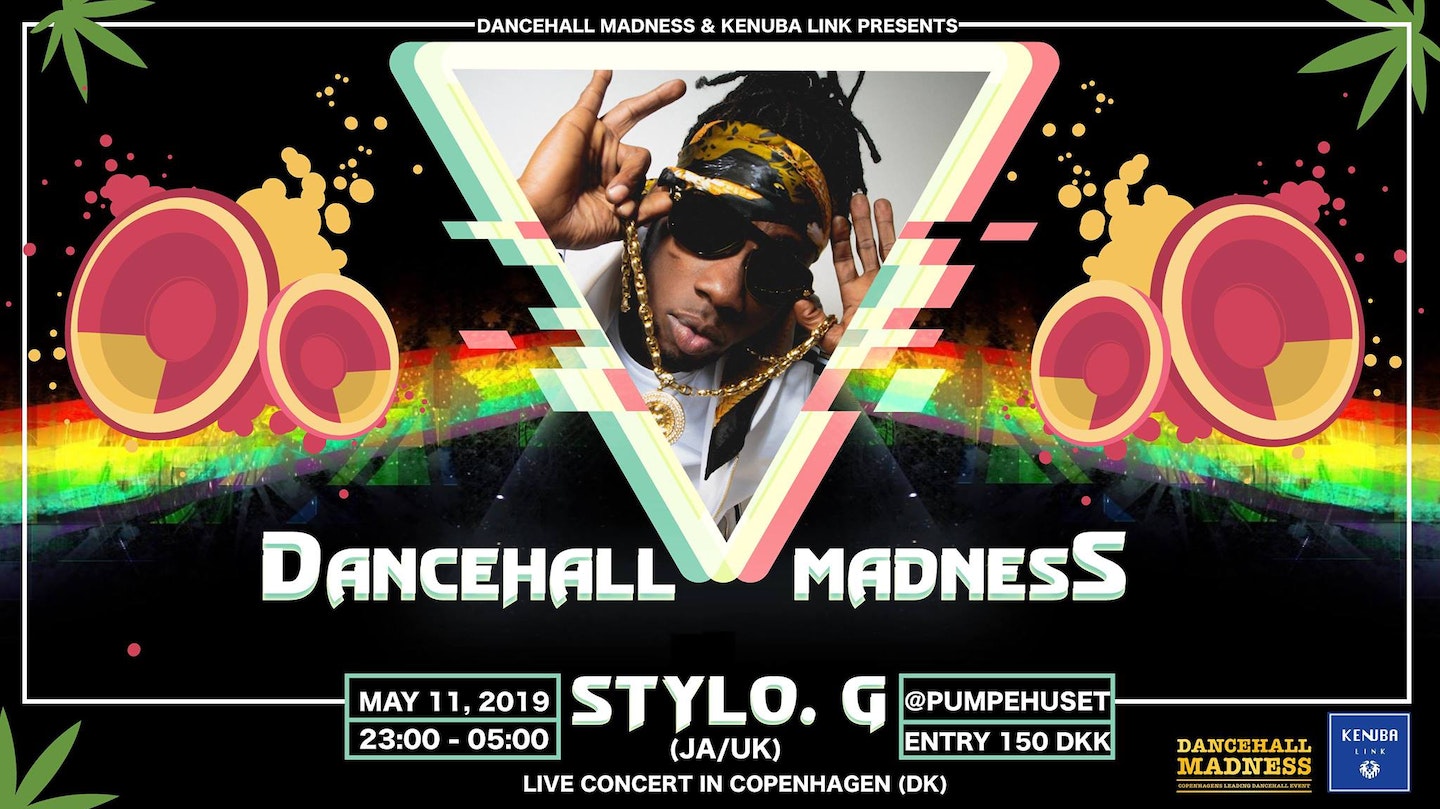 Until now Dancehall Madness has been a massive succes with 8 sold out shows in a row!

Still the next show will be extraordinaire! We take the whole dancehall madness concept with appearance and performances from the best dance crews in Denmark and south Sweden, and on top of that we bring you: STYLO G, UK´s biggest dancehall artist! ...read the bio ♥

Best known as STYLO G, Jason McDermott (born July 16th, 1985) is Britain’s fastest - rising Dancehall star. Born in Spanish Town, Jamaica, STYLO G moved to the UK (South London) in 2000 at the young age of 15, inspiring him to create his own style as a bridge between the cold streets of London and the hot and Sunny island of Jamaica.

Son of the legendary reggae artist POISON CHANG, STYLO G has followed in his father's footsteps, making his mark in the UK when the local Grime scene was at its peak and developing a pioneering style that bridges UK hip-hop and dancehall.

2012 was an explosive year for STYLO G with the release of underground smash hit and his breakthrough track “Call Mi a Yardie”. A quintessential carnival track, it won the support of radio, TV and DJ’s alike, and was the first track to break him in to the international scene and allowed his to gain approval of his peers in the industry.

After the success of “Call Mi A Yardie” STYLO G signed his first major record deal in 2013 with 3 BEAT / UNIVERSAL MUSIC (home to artists such as SIGMA, PIXIE LOTT, HIGH CONTRAST & more).

Soon after he followed up with a Mainstream banger “Sounbwoy” produced by UK / Dutch producer DIZTORTION, which was one of the first songs to successfully blend Jamaican dancehall with dubstep on the mainstream landscape.. “Soundbwoy” was STYLO G’s first major label release which proved to be his first Mainstream chart entry- the track peaked at #18 on the UK Official Charts.

STYLO G has since then collaborated with the likes of MAJOR LAZER, CLEAN BANDIT, PIXIE LOTT, JUNIOR REID, SHAGGY, BEENIE MAN & many more.

Over the past few years STYLO G has been actively touring the world: his performances have brought him to places such as Japan, Israel, Norway, Spain, Dubai, Switzerland, California, Colombia, Amsterdam, Italy and more.

After a solid string of singles, he released his debut album 10 years later in 2018, including his hit single “Yuh Zimme” feat CHIP which sold over 20’000 copies in the UK. The success of the project led him to do a tour with over 25 shows all over Europe, his latest Milestone is his feature with Spanish star MALA RODRIGUEZ “Contigo” which racked up over 8 MILLION VIEWS in the first month. On top of that, his latest single “Touch Down” has taken the dancehall community by storm, initiating the #TouchDownChallenge on social media which made the song go viral – 2019 will without a doubt see him take him career to the next level!